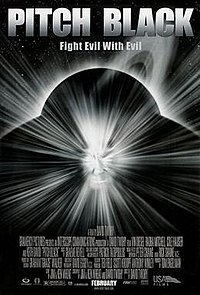 Pitch Black (titled The Chronicles of Riddick: Pitch Black on its DVD re-release) is a 2000 American science fiction action horror film co-written and directed by David Twohy. The film stars Vin Diesel, Radha Mitchell, Cole Hauser, and Keith David. Dangerous criminal Richard B. Riddick (Diesel) is being transported to prison in a spacecraft. When the spaceship is damaged by comet debris and makes an emergency crash landing on an empty desert planet, Riddick escapes. However, when predatory alien creatures begin attacking the survivors, Riddick joins forces with the surviving crew and other passengers to develop a plan to escape the planet.

In the distant future, the spaceship Hunter-Gratzner is transporting passengers in cryostasis. Among those are a Muslim preacher who goes by the title of Imam, accompanied by three young sons, traveling to New Mecca; a teenager named Jack; a pair of prospectors named Shazza and Zeke; a merchant named Paris; and a law enforcement officer, William J. Johns, who is escorting the notorious criminal Richard B. Riddick. Riddick has surgically modified eyes that allow him to see in the dark but are highly sensitive to light.