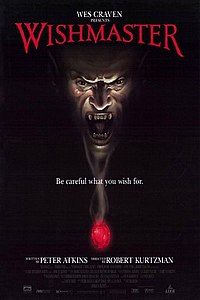 Wishmaster is a 1997 American fantasy slasher film directed by Robert Kurtzman. The film was executive produced by Wes Craven, and is the only film of the Wishmaster series with his name attached. Its plot concerns a djinn, a wish-granting, evil genie who is released from a jewel and seeks to capture the soul of the woman who discovered him, thereby opening a portal and freeing his fellow djinn to inhabit and enslave the Earth.

A narrator (Angus Scrimm) explains that when "God breathed life into the universe…the light gave birth to Angels…the earth gave birth to man...the fire gave birth to the djinn, creatures condemned to dwell in the void between the worlds." If a person wakes a djinn they will receive three wishes, but the third wish will free legions of djinn on Earth. In 1127, the djinn (Andrew Divoff) asks a Persian emperor to make his second wish. When the emperor wishes to see wonders, the djinn uses his powers to torture and mutilate people in the palace. The emperor is horrified, but the djinn tells him to use his third wish to set things right. Before the emperor can make his third wish, Zoroaster (Ari Barak), a sorcerer, explains the consequences of the third wish and reveals a fire opal, which pulls the djinn inside and traps him.