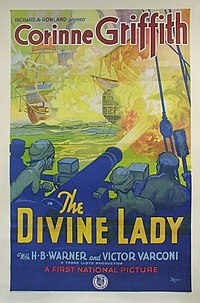 The Divine Lady is a 1929 American Vitaphone sound film with a synchronized musical score, sound effects, and some synchronized singing, but no spoken dialogue. It stars Corinne Griffith and tells the story of the love affair between Horatio Nelson and Emma Hamilton. It featured the theme song "Lady Divine", with lyrics by Richard Kountz and music by Nathaniel Shilkret, which became a popular hit in 1929 and was recorded by numerous artists, such as Shilkret, Frank Munn, Ben Selvin (as the Cavaliers), Smith Ballew, Adrian Schubert, Sam Lanin, and Bob Haring.

In the late eighteenth century, Lady Hamilton has had a somewhat turbulent relationship with the British people, especially the aristocracy. Born Emma Hart from a very humble background (she being the daughter of a cook), she was seen as being vulgar by the rich, but equally captivating for her beauty. In a move to protect his inheritance, Honorable Charles Greville, Emma's then lover and her mother's employer, sent Emma to Naples under false pretenses to live with his uncle, Sir William Hamilton, where she would study to become a lady. Surprisingly to Greville whose deception Emma would eventually discover, Emma ended up becoming Hamilton's wife in a marriage of convenience. But it is Emma's eventual relationship with Horatio Nelson of the British navy that would cause the largest issue. A move by Lady Hamilton helped Nelson's armada defeat Napoleon's fleet in naval battles, which Nelson would have ultimately lost without Lady Hamilton's help. Beyond the dangers of war, Lady Hamilton and Nelson's relationship is ultimately threatened by the court of public opinion as both are married to other people.