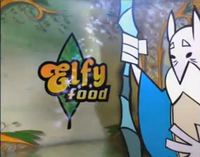 Elfy Food was a British animated mini-series that was produced by Turner Broadcasting for Cartoon Network UK in response to the published in November 2004. The six 2-minute cartoons featured 5 healthy-eating elves that were on a mission to retrieve magical foods. Its purpose was to promote "the virtues of fresh fruit and vegetables to a pre-teen audience".

Set in Elf Land, where a community of elves enjoy extraordinarily long and active lives, thanks to super-powers derived from their diet of "Elfy Food". But the ambitious evil dictator called Frank Farter, burns all the crops in a bid to make the elves too weak to fight his takeover plot, but not all hope is lost as the head of elves recalls a group of five young elves, Amy, Bippin, Yuri, Sylva and Ezra go and set out on a quest to find the secret and well-guarded stores of elfy food hidden in the land's most uncharted corners. But with ogres and baddies and along with evil Frank Farter and his minions hot on their trail, these elflings must find the crops before Frank Farter does. and when the elves eat the Elfy Food and gain more energy. At the end, they say the line "Once we've eaten, we can't be beaten!". But Frank Farter doesn't give up that easily.