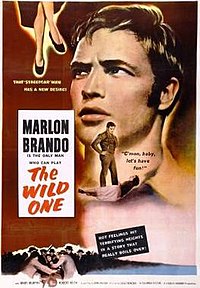 The Wild One is a 1953 American film noir crime film directed by László Benedek and produced by Stanley Kramer. It is most noted for the character of Johnny Strabler (Marlon Brando), whose persona became a cultural icon of the 1950s. The Wild One is considered to be the original outlaw biker film, and the first to examine American outlaw motorcycle gang violence.

The Black Rebels Motorcycle Club (BRMC), a gang led by Johnny Strabler, rides into Carbonville, California, during a motorcycle race and cause trouble. A member of the gang, Pidgeon, steals the second-place trophy (the first place one being too large to hide) and presents it to Johnny. Stewards and policemen order them to leave.