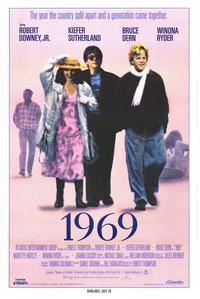 1969 is a 1988 American drama film written and directed by Ernest Thompson and starring Robert Downey Jr., Kiefer Sutherland, and Winona Ryder. The original music score is composed by Michael Small. The film deals with the Vietnam War and the resulting social tensions between those who support and oppose the war in small-town America.

The boys, Ralph and Scott, hitchhike home from college, arriving on Easter morning and shout their greetings across the glen to their family during a lakeside Easter Sunrise service, much to the amusement of Ralph's younger sister, Beth, and mother, Ev, and embarrassment of Scott's mother, Jessie, and father, Cliff. Later that day, they drive Scott's older brother, Alden, who's shipping off to Vietnam, to the bus depot; Alden pushes Scott when Scott says that his Marine brother is afraid to go to Vietnam. They begin fighting until their father arrives wondering what is going on.