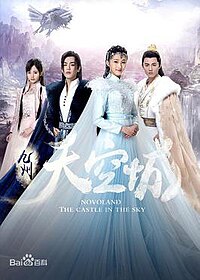 Novoland: The Castle in the Sky is a 2016 Chinese television series based on an original story created by Shanghai Film Media Asia and Tencent Penguin Pictures. Set in an ancient world (Novoland) where humanity is separated into several races, the series centers on the souring relations between the powerful Ren (Human) Tribe and the Yu (Winged) Tribe. It aired on Jiangsu TV from 20 July to 1 September 2016.