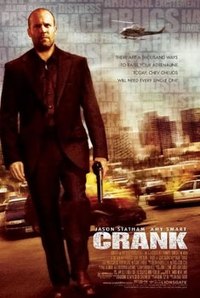 Crank is a 2006 American action film written and directed by Mark Neveldine and Brian Taylor (in their directorial debuts) and starring Jason Statham, Amy Smart and Jose Pablo Cantillo. The plot centres on a British hitman based in Los Angeles named Chev Chelios who is poisoned and must keep his adrenaline flowing constantly in order to keep himself alive. He does so by various methods including taking drugs and getting into fights, while he tries to track down the man who poisoned him. The title of the film comes from the slang word for methamphetamine.

Los Angeles-based English hitman Chev Chelios works for a crime syndicate led by Don "Carlito" Carlos. Chelios is contracted by Carlito to kill mafia boss Don Kim as members of the Triads have been encroaching on Carlito's business. Chelios goes to Don Kim and apparently murders him.