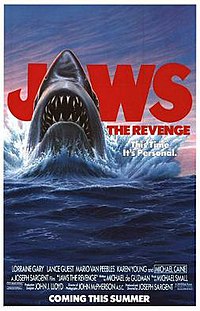 Jaws: The Revenge (also known as Jaws 4: The Revenge or Jaws 4) is a 1987 American horror thriller film produced and directed by Joseph Sargent, and starring Lorraine Gary, Lance Guest, Mario Van Peebles, and Michael Caine. It is the third sequel to Steven Spielberg's Jaws, and the fourth and final installment in the Jaws franchise.

On Amity Island, Martin Brody, famous for his role as the police chief and his heroism, has died from a heart attack. Martin's widow, Ellen, still lives in Amity close to her younger son, Sean, and his fiancée, Tiffany. Sean works as a police deputy. When he is dispatched to clear a log from a buoy a few days before Christmas, a great white shark appears and tears his arm off. He screams for help, but the singing on land drowns out his cries. The shark sinks his boat and drags him under the water.