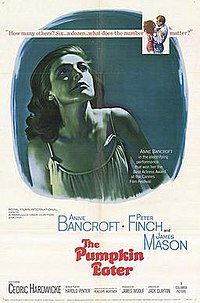 The Pumpkin Eater is a 1964 British drama film starring Anne Bancroft as an unusually fertile woman, and Peter Finch as her philandering husband.

The film's narrative revolves around Jo Armitage (Anne Bancroft), a woman with an ambiguous number of children from three marriages, who becomes negative and withdrawn after discovering that her third (and current) husband, Jake (Peter Finch), has been unfaithful to her. After a series of loosely related events in which Jake's infidelity is balanced by his reliability as a breadwinner and a father, Jo and Jake take a first tentative step toward reconciliation.