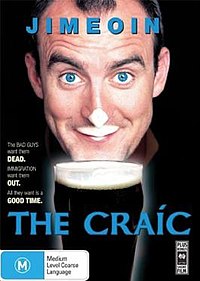 The Craic (stylised as The Craíc) is a 1999 Australian comedy film starring stand-up comedian Jimeoin with Alan McKee, directed by Ted Emery.

It is 1988 and two best friends from Ireland (Jimeoin [McKeown], Alan McKee) flee from Belfast after a violent confrontation with Colin (Robert Morgan) of the IRA and illegally enter Australia, finding seasonal work picking fruit at orchards to afford hostels, sustenance and booze costs (but so cash strapped, their whiskey and cokes are made by taking swigs of whiskey and coke, mixing the two on the fly in their mouth), the last often used to dim the two's fear of immigration officers.