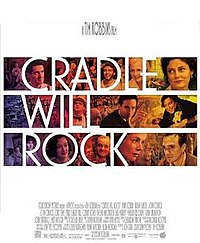 Cradle Will Rock is a 1999 American historical drama film written, produced and directed by Tim Robbins. The story fictionalizes the true events that surrounded the development of the 1937 musical The Cradle Will Rock by Marc Blitzstein; it adapts history to create an account of the original production, bringing in other stories of the time to produce a social commentary on the role of art and power in the 1930s, particularly amidst the struggles of the labor movement at the time and the corresponding appeal of socialism and communism among many intellectuals, artists and working-class people in the same period.

At the height of the Great Depression, aspiring singer Olive Stanton dreams of getting a job as an actress with the Federal Theatre Project. Playwright Marc Blitzstein is working on his new musical, The Cradle Will Rock, but lacks the inspiration to finish it. While attending a public protest, he is visited by two imaginary figures representing his late wife and the famed German playwright Bertolt Brecht. They encourage him to make the play more relevant to the times rather than an abstract concept.