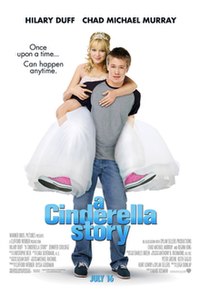 An eighteen-year-old Samantha "Sam" Montgomery is a waitress at a diner in the San Fernando Valley ran by her stepmother, the vain and greedy Fiona; she received ownership of the diner as well as the family after Sam's widowed father, Harold "Hal", died in the Northridge earthquake eight years before and left no will. Sam is trying to save money to attend her dream college, Princeton, but is regularly tormented by her stepfamily, which include Fiona and stepdaughter twins Brianna and Gabriella, with Fiona taking Sam's earnings and using the inheritance to spend on luxuries instead of necessities like water. Sam also struggles to fit in at North Valley High School, where she is bullied by the popular clique including head cheerleader and queen bee, Shelby Cummings. At the same time, Sam confides in her online pen pal "Nomad", who shares her dream to attend Princeton to become a writer, her best friend but outcast, Carter Farrell, and finds comfort in the diner staff, including Rhonda the manager, Eleanor, a waitress and Bobby the chef. "Nomad"'s true identity is Austin Ames, the popular yet unhappy quarterback of the school's football team, The Fighting Frogs, and Shelby's boyfriend who he attempts to break up with. His father, Andy, has arranged for his son to attend the University of Southern California with a football scholarship.