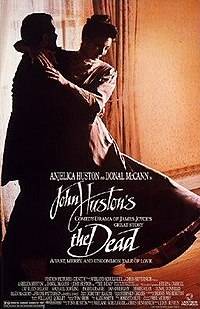 The Dead is a 1987 drama film directed by John Huston, written by his son Tony Huston and starring his daughter Anjelica Huston with Donal McCann, Cathleen Delany, Helena Carroll, Marie Kean, Donal Donnelly, Colm Meaney, and Dan O'Herlihy. An international co-production between Ireland, the United Kingdom, the United States, and West Germany, The Dead was Huston's last film as director, and it was released posthumously. It was adapted from the 1914 short story "The Dead" by James Joyce, which was included in his short works collection Dubliners.

On January 6, 1904, spinster sisters Kate and Julia Morkan and their unmarried niece, Mary Jane, host their annual Feast of Epiphany dinner party at their townhouse in Dublin. Horse-drawn carriages arrive with guests on the snowy night.