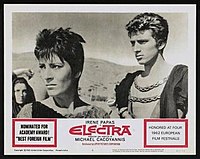 Electra ( Ilektra) is a 1962 Greek film based on the play Electra, written by Euripides. It was directed by Michael Cacoyannis, as the first installment of his "Greek tragedy" trilogy, followed by The Trojan Women in 1971 and Iphigenia in 1977. It starred Irene Papas in the lead role as Elektra, and Giannis Fertis as Orestis.

King Agamemnon is murdered by his wife Clytemnestra and her lover and Agememnon's cousin and childhood playmate Aegisthus. Of Agamemnon and Clytemnestra's children, Orestes goes into exile and safety while Electra is confined to the palace for some years and then forced to marry a peasant to disgrace her and any children.