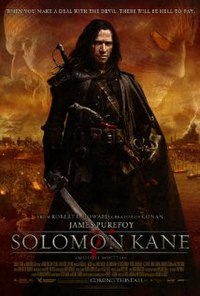 Solomon Kane is a 2009 French-British-Czech action-adventure film written and directed by Michael J. Bassett based on the pulp magazine character Solomon Kane created in 1928 by Robert E. Howard. James Purefoy stars in the title role. Despite obtaining the rights in 1997, filming did not begin until January 2008.

In the year 1600, in North Africa, English mercenary Solomon Kane leads his ship's crew into battle against the Ottoman occupiers of a fortress town. After defeating the defenders, Kane and his men raid the fortress, where most of the crew are killed by demons. Kane fights his way to the throne room, but, before he can loot the riches, he is confronted by a demon, calling itself the "Devil's Reaper", who tells him his soul is forfeit to Satan after his life of sin. Solomon rejects his fate and jumps out a window to escape. Following this encounter, Solomon returns to England and finds sanctuary in a monastery. After a prophetic dream, the abbot apologetically expels Kane, and Kane travels by foot to his ancestral estate, from which he had been expelled in his youth after defying his father. Along the way, he is ambushed by robbers who mock his vow of pacifism and leave him for dead. He is found and treated by the Crowthorns, a family of Puritans traveling west to the New World. When the Crowthorns are slaughtered by corrupted followers of the evil sorcerer Malachi, Kane renounces his vows and swears to avenge their deaths and rescue Meredith Crowthorn, who has been marked by a witch and kidnapped by the Masked Rider, Malachi's lieutenant.