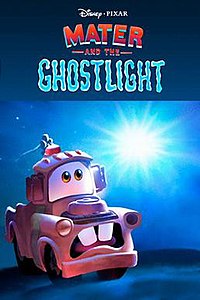 Mater and the Ghostlight 2006

Mater and the Ghostlight is a 2006 Pixar computer-animated short film released as a special feature on the DVD of Pixar's film Cars, which was released in the United States and Canada on November 7, 2006. The short, set in the Cars world, tells a story of Mater being haunted by a mysterious blue light.

The short opens with Mater pranking the other residents of Radiator Springs by moving Red's flowers, bursting out from a pile of tires to jumpscare Guido and Luigi, dressing up as a cone vampire to scare Sally, attempting to scare Lizzie while she's sleeping (which is unsuccessful), moving Fillmore's gas cans back outside while he takes them in and finally jumpscaring Lightning McQueen when he believes Mater is hiding behind a pile of cans ready to jump out (what was really behind the pile of cans is one of Mater's signs). This sequence then culminates with Mater teasing McQueen as if he had seen "the Ghostlight," a Route 66 urban legend.