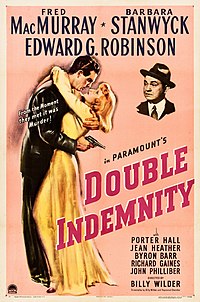 Double Indemnity is a 1944 American crime film noir directed by Billy Wilder, co-written by Wilder and Raymond Chandler, and produced by Buddy DeSylva and Joseph Sistrom. The screenplay was based on James M. Cain's 1943 novel of the same title, which appeared as an eight-part serial for Liberty magazine in February 1936.

In 1938, insurance salesman Walter Neff returns to his office in downtown Los Angeles with a gunshot wound on his shoulder. He records a confession on a dictaphone for his friend and colleague, claims adjuster Barton Keyes. A flashback ensues.