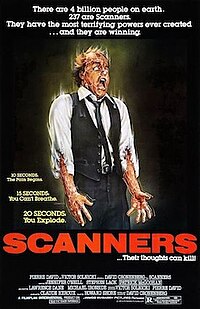 Scanners is a 1981 Canadian science fiction horror film written and directed by David Cronenberg and starring Stephen Lack, Jennifer O'Neill, Michael Ironside, and Patrick McGoohan. In the film, "scanners" are psychics with unusual telepathic and telekinetic powers. ConSec, a purveyor of weaponry and security systems, searches out scanners to use them for its own purposes. The film's plot concerns the attempt by Darryl Revok (Ironside), a renegade scanner, to wage a war against ConSec. Another scanner, Cameron Vale (Lack), is dispatched by ConSec to stop Revok.

Cameron Vale is a downtrodden vagrant who suffers from voices manifesting in his head. After involuntarily causing a woman to have a seizure with his telepathy, Vale is captured by the private military company ConSec and brought to Dr. Paul Ruth, who explains that Vale is one of 237 super-powered individuals known as "scanners" capable of telepathy, empathy, biopathy and psychokinesis. Ruth injects Vale with a drug called "ephemerol", which restores his sanity by temporarily inhibiting his scanning ability, and teaches him to control his abilities. ConSec is attempting to recruit scanners to stop a malevolent underground ring of scanners led by Darryl Revok, a former mental patient who trepanned his own skull to cope with the same uncontrollable stream of thoughts. Ruth explains that Revok's uncontrolled powers drove him mad and asks Vale to help infiltrate Revok's group. Revok, who is killing all opposing scanners, infiltrates a ConSec marketing event and psychically explodes the head of a domesticated ConSec scanner. ConSec security head Braedon Keller advocates shutting down ConSec's scanner research program but Ruth, who believes the scanners' abilities are the next stage of human evolution, disagrees and notes that the assassination demonstrates Revok's danger. Ruth brings in Vale and asks him to help infiltrate Revok's group.