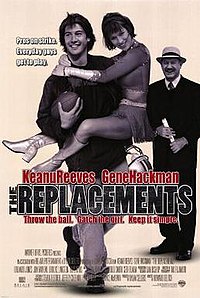 The Replacements is a 2000 American sports comedy film directed by Howard Deutch. It stars Keanu Reeves, Gene Hackman, Brooke Langton, Jon Favreau and Jack Warden in what would be his last film appearance.

A fictional pro football league finds themselves hit with a players' strike with the season still needing to be finished. Washington Sentinels owner Edward O'Neil calls a former coach of his, Jimmy McGinty, telling McGinty that he and the rest of the teams are going to finish the final four games of the season with replacement players. O'Neil asks McGinty to coach the Sentinels the rest of the season, along with the pressure of winning three of the last four games to make the playoffs. McGinty accepts, on the condition that he will also be given the freedom to sign the players he wants with O'Neil not allowed to interfere.