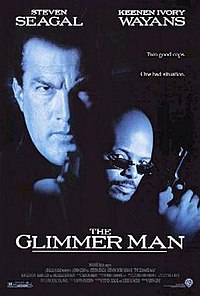 The Glimmer Man is a 1996 American buddy cop action comedy film directed by John Gray, and produced by Steven Seagal. The film stars Seagal, Keenen Ivory Wayans, Bob Gunton, and Brian Cox. The film was released in the United States on October 4, 1996.

Jack Cole was once a CIA operative known as "The Glimmer Man," because he could move so quickly and quietly through the jungle that his victims would only see a glimmer before they died. Having retired from Central Intelligence, Coleversed in Buddhism and unaccustomed to working with othershas become a detective with the Los Angeles Police Department.