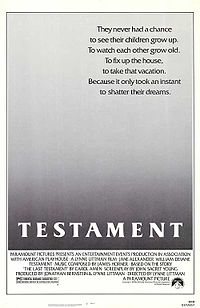 Testament is a 1983 drama film based on a three-page story titled "The Last Testament" by Carol Amen (1933–1987), directed by Lynne Littman and written by John Sacret Young. The film tells the story of how one small suburban town near the San Francisco Bay Area slowly falls apart after a nuclear war destroys outside civilization. It was one of the films, along with television miniseries ,The Day After, that portrayed life after a nuclear war, mostly in response to an increase in hostility between the United States and the Soviet Union.

The Wetherly family — husband Tom, wife Carol, and children Brad, Mary Liz, and Scottie — live in the fictional suburb of Hamelin, California, within a 90-minute drive north of San Francisco, where Tom works.