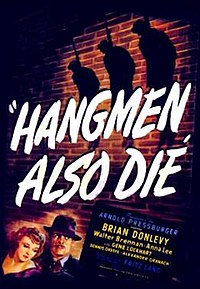 Hangmen Also Die! is a 1943 noir war film directed by the Austrian director Fritz Lang and written by John Wexley from a story by Bertolt Brecht (credited as Bert Brecht) and Lang. The film stars Hans Heinrich von Twardowski, Brian Donlevy, Walter Brennan, Alexander Granach and Anna Lee, and features Gene Lockhart and Dennis O'Keefe. Hanns Eisler composed the score, being nominated for an Academy Award, and the cinematographer was James Wong Howe.

During the Nazi occupation of Czechoslovakia, surgeon Dr. František Svoboda, a Czech patriot, assassinates the brutal "Hangman of Europe", Reichsprotektor Reinhard Heydrich, but his getaway car is discovered and therefore his planned safe house must reject him. When a woman whom he does not know, named Mascha, deliberately misdirects German soldiers close to finding him, he seeks her home as an alternative safe house. This turns out to be the home of her father, history professor Stephen Novotny, whom the Nazis have banned from teaching. This plan works. But because the assassin now cannot be found, the Nazi leaders in Prague decide to create an incentive for him to turn himself in or for others to do so. They arrange with the help of fifth-columnist Emil Czaka, a wealthy brewer for 400 citizens, including Professor Novotny, to be executed, forty at a time, until the assassin is named. Through a complex series of events, however, the resistance manages to frame Czaka himself for the murder, but not before the Nazis have executed many of the hostages.