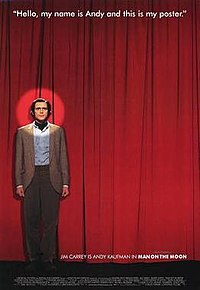 Man on the Moon is a 1999 biographical comedy-drama film about the late American entertainer Andy Kaufman, starring Jim Carrey as Kaufman. The film was directed by Miloš Forman and also features Danny DeVito, Courtney Love, and Paul Giamatti.

Andy Kaufman is a struggling performer whose act fails in nightclubs because, while the audience wants comedy, he sings children's songs and refuses to tell conventional jokes. As the audience begins to believe that Kaufman may have no real talent, his previously timid "foreign man" character puts on a rhinestone jacket and does a dead-on Elvis impersonation. The audience bursts into applause, realizing Kaufman had tricked them.