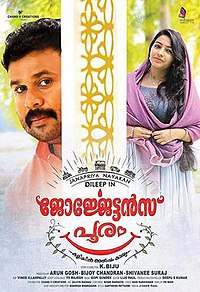 Georgettan's Pooram (Georgettan's Festival) is a 2017 Indian Malayalam film directed by K. Biju, starring Dileep in lead role. The screenplay is written by Y. V. Rajesh based on a story by Biju. It is produced by Arun Gosh and Bijoy Chandran under the banner of Shivani Entertainments and Chand V Creations. Principal photography began in October 2017 in Thrissur.

P. V. Mathayyi was a participant in the 1990 Asian Games in Beijing. After India beat Bangladesh, P.V Mathayyi rose to prominence as one of the first Malayalis, from the district of Thrissur to win a gold medal at the Asian Games. When the Games ended, Mathayyi was welcomed back wholeheartedly by the rest of the people in his area. He gifted the youth of the place a ground and a sports club, which the people named Mathayyiparambu. However, the happiness was short-lived, after Mathayyi was killed in a road accident. The people built a statue in his honour in Mathayyiparambu, but soon afterwards, the people forgot the ground's initial use as a sports ground, and the place became a place for the youth to loiter around and play football.