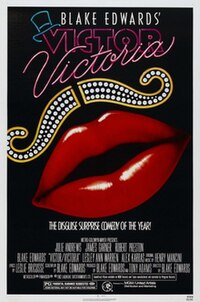 Victor/Victoria is a 1982 British-American musical comedy film directed by Blake Edwards and starring Julie Andrews, James Garner, Robert Preston, Lesley Ann Warren, Alex Karras, and John Rhys-Davies. The film was produced by Tony Adams and scored by Henry Mancini, with lyrics by Leslie Bricusse. Released by Metro-Goldwyn-Mayer, it was adapted in 1995 as a Broadway musical. The film was nominated for seven Academy Awards and won the Academy Award for Best Original Score. It is a remake of the 1933 German film Viktor und Viktoria.

In 1934 Paris, Carroll "Toddy" Todd, an aging gay performer at Chez Lui in Paris, sees Labisse, the club owner, auditioning a frail, impoverished soprano, Victoria Grant. After her failed audition, Victoria returns to her hotel room to find herself evicted, unable to pay rent. That night, when Richard, a hustler with whom Toddy is romantically involved, comes to Chez Lui as part of a straight foursome, Toddy incites a brawl. Labisse fires Toddy and bans him from the club. Walking home, he spots Victoria in a restaurant. She invites him to join her. As neither of them can pay for the meal, she dumps a cockroach in her salad to avoid paying, but it escapes and mayhem ensues.