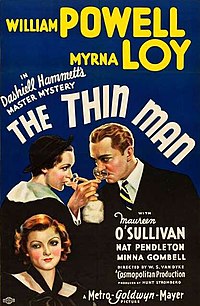 The Thin Man is a 1934 American comedy-mystery directed by W. S. Van Dyke and based on the novel of the same name by Dashiell Hammett. The film stars William Powell and Myrna Loy as Nick and Nora Charles, a leisure-class couple who enjoy copious drinking and flirtatious banter. Nick is a retired police detective who left his very successful career when he married Nora, a wealthy heiress accustomed to high society. Their wire-haired fox terrier Asta was played by canine actor Skippy. In 1997, the film was added to the United States National Film Registry having been deemed "culturally, historically, or aesthetically significant."

Nick Charles (William Powell), a retired detective, and his wealthy wife Nora (Myrna Loy), are visiting New York City to spend the Christmas holidays. There, Nick is pressed back into service by Dorothy Wynant (Maureen O'Sullivan), a young woman whose father, Clyde (Edward Ellis), was an old client of Nick's. Clyde, the title's "thin man", was supposed to be on a secret business trip and promised to be home before his daughter's wedding, but has mysteriously vanished. She convinces Nick to take the case, with the assistance of his socialite wife, eager to see him in action. What appears to be a missing person case turns into a murder case when Julia Wolf (Natalie Moorhead), Clyde's former secretary and love interest, is found dead, and evidence points to Clyde as the prime suspect. Dorothy refuses to believe that her father is guilty. The detective uncovers clues and eventually solves the mystery of the disappearance.