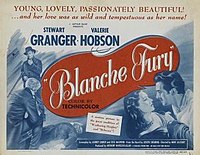 Blanche Fury is a 1948 British Technicolor drama film directed by Marc Allégret and starring Valerie Hobson, Stewart Granger and Michael Gough. It was adapted from a novel by Joseph Shearing. In Victorian era England, two schemers will stop at nothing to acquire the Fury estate, even murder.

The plot is based on an actual homicide case from Victorian England. Blanche Fury (Valerie Hobson) is a beautiful and genteel woman, forced into menial domestic service after the death of her parents. After a succession of failed positions, she receives an invitation to become governess for Lavinia, granddaughter of her rich uncle Simon, whom she has never previously met due to an unspecified dispute between him and her father.