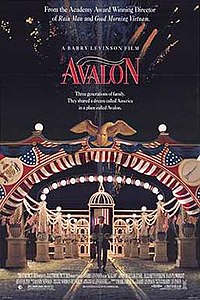 Avalon is a 1990 American drama film written and directed by Barry Levinson and starring Armin Mueller-Stahl, Aidan Quinn, Elizabeth Perkins, Joan Plowright, and Elijah Wood. It is the third in Levinson's semi-autobiographical tetralogy of "Baltimore films" set in his hometown during the 1940s, 1950s, and 1960s: Diner (1982), Tin Men (1987), and Liberty Heights (1999). The film explores the themes of Jewish assimilation into American life, through several generations of a Polish immigrant family from the 1910s through the 1950s.

It is the late 1940s and early 1950s, and much has happened to the family of Polish Jewish immigrant Sam Krichinsky since he first arrived in America in 1914 and eventually settled in Baltimore.