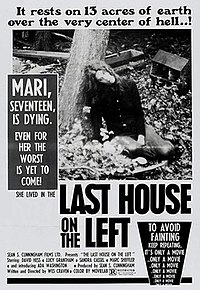 The Last House on the Left is a 1972 American exploitation horror film written, directed and edited by Wes Craven in his directorial debut. The film follows Mari Collingwood (Sandra Peabody), a hippie teenager who is abducted, raped, and tortured by a fugitive family on her seventeenth birthday. When they unwittingly seek refuge in her home, the killers face the vengeance of her parents.

Mari Collingwood plans to attend a concert with her friend Phyllis Stone, for her seventeenth birthday. Her parents, Estelle and John, express their concern about her friendship with Phyllis, but let her go and give her a peace symbol necklace. Phyllis and Mari head into the city and on the way, they hear a news report of a recent prison escape involving criminals Krug Stillo, a sadistic rapist and serial killer; his heroin-addicted son, Junior; Sadie, a promiscuous psychopath and sadist; and Fred "Weasel" Podowski, a child molester, peeping Tom and murderer. Before the concert, Mari and Phyllis encounter Junior while he is trying to buy marijuana. He leads them to an apartment where they are trapped by the criminals. Phyllis tries to escape and reason with them, but she fails and is gang-raped. Meanwhile, Mari's unsuspecting parents prepare a surprise party for her.