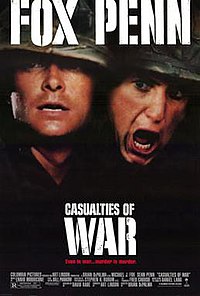 Casualties of War is a 1989 American war drama film directed by Brian De Palma and written by David Rabe, based primarily on an article written by Daniel Lang for The New Yorker in 1969 and a subsequent book. The film stars Michael J. Fox and Sean Penn, and is based on the events of the 1966 incident on Hill 192 during the Vietnam War, in which a Vietnamese woman was kidnapped from her village by a squad of American soldiers, who raped and murdered her.

The story is presented as a flashback of Max Eriksson, a Vietnam veteran.