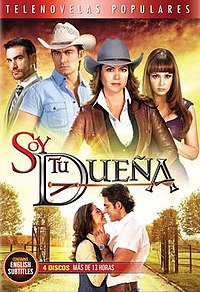 Soy tu dueña (English: A Woman of Steel) is a Mexican telenovela produced by Nicandro Díaz González for Televisa. It is a remake of the telenovela La Dueña, produced in 1995. It stars Lucero and Fernando Colunga as the protagonists, while Gabriela Spanic , David Zepeda, Sergio Goyri stars as the antagonists.

Valentina Villalba Rangel (Lucero) is a successful businesswoman and the heiress of a great fortune that her parents left to her upon their untimely death during Valentina’s childhood. Valentina has been raised by her aunt, Isabel Rangel (Silvia Pinal). She lives in a beautiful mansion in Mexico City with her aunt, her cousin, Ivana Dorantes Rangel (Gabriela Spanic), and her faithful nanny since her birth, Benita Garrido (Ana Martín). Valentina is a generous woman who shares her fortune and home with her aunt and cousin. But Ivana, Isabel’s only child, is consumed with envy and jealousy toward Valentina and believes she deserves everything her cousin has.