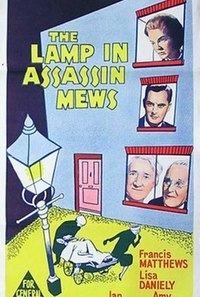 The Lamp in Assassin Mews 1962

The Lamp in Assassin Mews is a 1962 British comedy crime film directed by Godfrey Grayson and starring Francis Matthews, Lisa Daniely and Ian Fleming. The film's plot concerns a local council's plans to gentrify an area, which are disrupted by a series of murders. It is also known by the alternative title of Durrant Affair.

Modernising councillor Jack Norton becomes the target of a couple of elderly serial killers when he plans to remove a gas lamp outside their home.