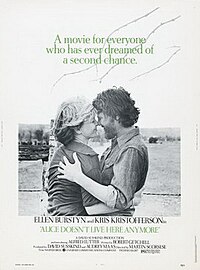 When Socorro, New Mexico, housewife Alice Hyatt's husband Donald is killed in an auto accident, she decides to have a garage sale, pack what's left of her meagre belongings, and take her precocious son Tommy to her childhood hometown of Monterey, California, where she hopes to pursue the singing career she abandoned when she married.