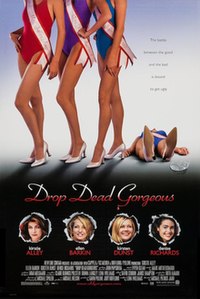 In 1995, Mount Rose is preparing for its annual beauty pageant, the Sarah Rose Cosmetics Mount Rose American Teen Princess Pageant. Amber Atkins (Kirsten Dunst) is an optimistic teenager who signs up to compete in the pageant so she can follow in the footsteps of her idols, television news reporter Diane Sawyer, and Amber's mother, Annette, a former contestant. Amber works after school applying makeup to corpses at the mortuary, and lives with her mother, Annette Atkins (Ellen Barkin), in a small trailer near their friend Loretta (Allison Janney). This is in stark contrast to fellow contestant Rebecca ("Becky") Leeman (Denise Richards), the daughter of the richest man in town and his wife, Gladys Leeman (Kirstie Alley), who is the head of the pageant organizing committee and a former winner. Various business connections between the Leeman Furniture Store and the judges of the pageant cause many to speculate that the contest will be rigged or fixed.