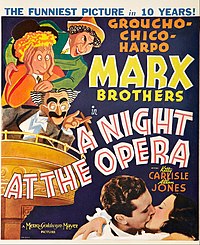 A Night at the Opera is a 1935 American comedy film starring the Marx Brothers, and featuring Kitty Carlisle, Allan Jones, Margaret Dumont, Sig Ruman, and Walter Woolf King. It was the first of five films the Marx Brothers made under contract for Metro-Goldwyn-Mayer after their departure from Paramount Pictures, and the first after Zeppo left the act. The film was written by George S. Kaufman and Morrie Ryskind from a story by James Kevin McGuinness, with additional uncredited dialogue by Al Boasberg. The film was directed by Sam Wood.

In Milan, Otis B. Driftwood (Groucho), business manager for wealthy dowager Mrs. Claypool (Margaret Dumont) has stood her up and is having dinner with another woman in the very same restaurant. When she discovers him seated directly behind her, Driftwood joins Mrs. Claypool, and introduces her to Herman Gottlieb (Sig Ruman), director of the New York Opera Company, also dining at the restaurant. Driftwood has arranged for Mrs. Claypool to invest $200,000 in the opera company, allowing Gottlieb to engage Rodolfo Lassparri (Walter Woolf King), the "greatest tenor since Caruso".