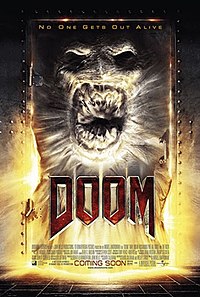 Doom is a 2005 science fiction action film directed by Andrzej Bartkowiak. It is loosely based on the video game series of the same name by id Software, however, the film adapts elements from Doom 3. The film stars Karl Urban, Rosamund Pike, Razaaq Adoti, and Dwayne Johnson (credited as The Rock). In the film, a group of Marines are sent on a rescue mission to a facility on Mars, where they encounter genetically engineered creatures.

In 2026, a wormhole portal, the Ark, to an ancient city on Mars is discovered deep below the Nevada desert. Twenty years later, the 85 personnel at the Union Aerospace Corporation (UAC) research facility on Mars are attacked by an unknown assailant. Following a distress call sent by Dr. Carmack, a squad of eight Marines are sent to the research facility. The team includes squad leader Sgt. Asher "Sarge" Mahonin, "Duke", "Goat", "Destroyer", Portman, "Mac", a rookie ("Kid") and John "Reaper" Grimm. They are sent on a search-and-destroy mission to Mars, with UAC only concerned with retrieval of computer data from their anthropology, archeology and genetics experiments.