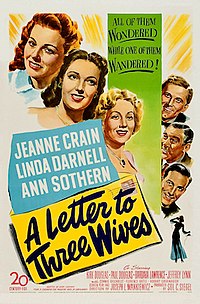 A Letter to Three Wives is a 1949 American romantic drama film which tells the story of a woman who mails a letter to three women, telling them she has left town with the husband of one of them. It stars Jeanne Crain, Linda Darnell, Ann Sothern, Paul Douglas in his film debut, Kirk Douglas, Jeffrey Lynn, and Thelma Ritter. An uncredited Celeste Holm provides the voice of Addie Ross, the unseen woman who wrote the titular letter.

Just as they are about to take a group of underprivileged children on a riverboat ride and picnic, Deborah Bishop (Jeanne Crain), Rita Phipps (Ann Sothern), and Lora Mae Hollingsway (Linda Darnell) receive a message from Addie Ross informing them that she has run off with one of their husbands. However, she leaves them in suspense as to which one. All three marriages are shown in flashback to be strained.