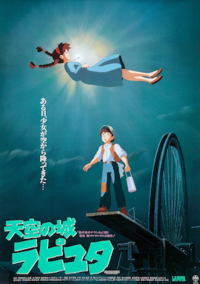 , known as simply Castle in the Sky in North America, is a 1986 Japanese animated fantasy-adventure film written and directed by Hayao Miyazaki. It was the first film animated by Studio Ghibli and was animated for Tokuma Shoten. It follows the adventures of a young boy and girl in the late 19th century attempting to keep a magic crystal from a group of military agents, while searching for a legendary floating castle. The film was distributed by Toei Company.

An airship carrying Sheeta, a young orphan girl who has been abducted by government agent Muska, is attacked by Captain Dola and her air pirate sons who are in search of Sheeta's small blue crystal pendant. In the resulting struggle, Sheeta falls from the airship but her descent is slowed by a mysterious power within the amulet. She safely lands in a small mining town where she is discovered by a brave young orphan boy named Pazu, who takes her to his home to recover. Pazu tells her of a mysterious floating island named Laputa which is visible in a picture taken by his father. Later, they are pursued by Dola's pirates, and then by Muska's soldiers. Eventually, the two fall into an abandoned mine, where they encounter the local eccentric Uncle Pomme, who informs them that Sheeta's amulet is made of 'hikouseki''' ('levitation stone') crystal ('Volucite' or 'Aetherium' in English-language releases), a material used to keep Laputa and the other flying cities aloft.<ref>{{cite web |title=Tenkuu no Shiro Rapyuta – Synopsis |publisher=The Hayao Miyazaki Web |work=Nausicäa |url=http://www.nausicaa.net/miyazaki/laputa/synopsis/ |access-date=December 13, 2009 |archive-url=https://web.archive.org/web/20100323093136/http://www.nausicaa.net/miyazaki/laputa/synopsis/ |archive-date=March 23, 2010 |url-status=live }}</ref>