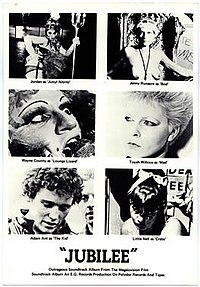 Jubilee is a 1978 cult film directed by Derek Jarman. It stars Jenny Runacre, Ian Charleson and a host of punk rockers, including Adam Ant and Toyah. The title refers to the Silver Jubilee of Elizabeth II in 1977.

Queen Elizabeth I (Jenny Runacre) is transported forward in time by the occultist John Dee (Richard O'Brien) by the aid of the spirit guide Ariel (a character from William Shakespeare's The Tempest) whom he commands. Elizabeth arrives in the shattered Britain of the 1970s. Queen Elizabeth II is dead, killed in an arbitrary mugging, and Elizabeth I moves through the social and physical decay of the city observing the sporadic activities of a group of aimless nihilists, including Amyl Nitrate (Jordan), Bod (Runacre in a dual role), Chaos (Hermine Demoriane), Crabs (Nell Campbell), and Mad (Toyah Willcox).