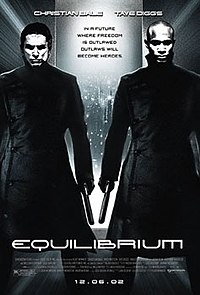 Libria, a totalitarian city-state established by survivors of World War III, blames human emotion as the cause for the war. Any activity or object that stimulates emotion is strictly forbidden. Those in violation are labelled "Sense Offenders" and sentenced to death. The population is forced to take a daily injection of "Prozium II" to suppress emotion. Libria is governed by the Tetragrammaton Council, led by "Father", who communicates propaganda through giant video screens throughout the city. At the pinnacle of law enforcement are the Grammaton Clerics, trained in the martial art of gun kata. Clerics frequently raid homes to search for and destroy illegal materials – art, literature and music – executing violators on the spot. A resistance movement, known as the "Underground", emerges to topple Father and the Tetragrammaton Council.