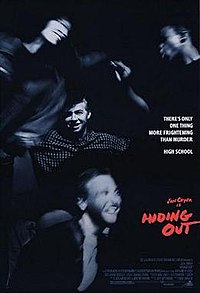 Hiding Out is a 1987 American comedy-drama film starring Jon Cryer as a state's witness who disguises himself as a high school student in order to avoid being killed by the mob.

Revealed shortly into the movie, Andrew Morenski and two others, all stockbrokers, have passed bogus bonds for a mobster awaiting trial. After an evening out at a bar, one of them is killed in his home. The next morning, the FBI take the other two into protective custody.