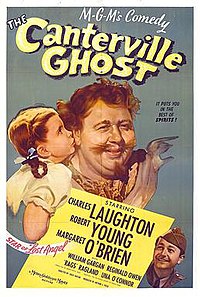 The Canterville Ghost is a 1944 fantasy/comedy film directed by Jules Dassin, loosely based on the 1887 short story of the same title by Oscar Wilde. It starred Charles Laughton as a ghost doomed to haunt an English castle and Robert Young as his American relative called upon to perform an act of bravery to redeem him.

In the seventeenth century, Sir Simon de Canterville (Charles Laughton) is forced by the Code of Chivalry to engage in a duel on behalf of his brother, but flees to the family castle when his opponent engages a substitute—a giant, the Bold Sir Guy (played by an uncredited Tor Johnson). His proud father, Lord Canterville (Reginald Owen), refuses to acknowledge that his son has disgraced the family name, even when shown in front of witnesses where Simon is cowering. The father has the only entrance to his son's hiding place bricked over as proof that Simon is not there, ignoring Simon's pleas for mercy. Lord Canterville then curses his doomed cowardly son to find no rest until "a kinsman shall perform an act of bravery" in his name, wearing his signet ring.