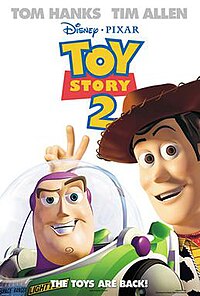 Toy Story 2 is a 1999 American computer-animated comedy film directed by John Lasseter and produced by Pixar Animation Studios for Walt Disney Pictures. It is the sequel to 1995's Toy Story, the second film in the Toy Story franchise and the first ever computer animated sequel. In the film, Woody is stolen by a toy collector, prompting Buzz Lightyear and his friends to rescue him, but Woody is then tempted by the idea of immortality in a museum. Tom Hanks, Tim Allen, Don Rickles, Wallace Shawn, John Ratzenberger, Jim Varney, Annie Potts, R. Lee Ermey, John Morris, and Laurie Metcalf all reprise their character roles from the original film. The returning cast is joined by Joan Cusack, Kelsey Grammer, Estelle Harris, Wayne Knight, and Jodi Benson, who voice the new characters introduced in this film.

Andy prepares to go to cowboy camp with Woody, but accidentally tears Woody's arm during playtime. Andy leaves without him, and Woody later finds Wheezy, a squeeze toy penguin with a broken squeaker. When Andy's mother puts Wheezy in a yard sale, Woody rescues him from being sold, but is stolen in the process by a greedy toy collector named Al McWhiggin (the owner of Al's Toy Barn). At Al's apartment, Woody learns he is based on the main character of a 1950s TV show called Woody's Roundup and, along with Jessie, Bullseye, and Stinky Pete the Prospector (the other characters in his show), they are set to be sold to a museum in Tokyo, Japan, but Woody intends to return to Andy, much to Jessie's ire. Prospector explains the museum is only interested in the collection if it is complete, and without Woody, they will be returned to storage, which triggers Jessie's claustrophobia. Al accidentally rips Woody's arm off completely while planning a photograph of the Roundup gang, so he calls a toy cleaner to come the next morning to fix him. That night while Al is sleeping, Woody attempts to retrieve his arm and escape, but his attempt is sabotaged when Al's television turns on, waking up Al in the process, and he angrily blames Jessie when he finds the TV remote in front of her. The next day, the toy cleaner arrives and reattaches Woody's arm. Woody discovers that Jessie once belonged to a girl named Emily, who eventually outgrew her and gave her away. Prospector warns Woody the same fate awaits him when Andy grows up, whereas he would last forever in the museum. Woody decides to stay, much to the delight of the others.