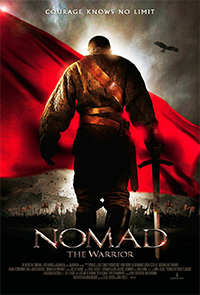 Nomad: The Warrior is a 2005 Kazakh historical epic film written and co-produced by Rustam Ibragimbekov, executive-produced by Miloš Forman and directed by Sergei Bodrov, Ivan Passer and Talgat Temenov. It was released on March 16, 2007 in North America, distributed by The Weinstein Company. Two versions of the film were shot: one in Kazakh by Temenov for distribution in Kazakhstan and one in English by Passer and Bodrov for distribution worldwide. The government of Kazakhstan invested $40 million in the film production, making it the most expensive Kazakh film ever made. Nomad was Kazakhstan's official entry for Best Foreign Language Film for the 79th Academy Awards.

Nomad is an historical epic set in 18th-century Kazakhstan. The film is a fictionalized account of the youth and coming-of-age of Ablai Khan, a Khan of the Kazakh Horde, as he grows and fights to defend the fortress at Hazrat-e Turkestan from Dzungar invaders during the Kazakh-Dzungar Wars.