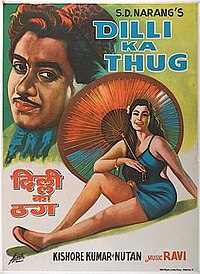 Dilli Ka Thug (The Trickster of Delhi) is a 1958 Hindi-language comedy film. It stars Kishore Kumar, Nutan, Madan Puri and Iftekhar. The music was by Ravi and the lyrics were by S.H. Bihari, Shailendra and Majrooh Sultanpuri. The song "Hum to mohabbat karega" was Sultanpuri's contribution.

Kishore Kumar Sharma (Kishore Kumar) gambles and tricks people to make money. On being confronted by his mother, he decides to find a job and lands one in Mumbai, where he continues wooing Asha (Nutan). Kishore's father and his friend were murdered by the notorious Anantram who now wears a mask to hide his true identity, continues manufacturing spurious medicines and also passes as Nutan's uncle. The firm employing Kishore is run by Anantram and his two henchmen Sevakram and Bihari. Anantram goes to murder Kishore in the hospital, but drops his monocle, which makes Inspector Dilip (Iftekhar) suspicious. He manages to take Anantram's fingerprints on Sohan Lal's wallet and figures out the truth. What follows is a dramatic air-borne sequence where Anantram is beaten by Kishore and shot by Nutan. Kishore manages to land the airplane after the pilots lose consciousness.