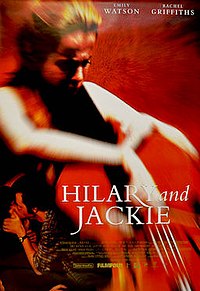 Hilary and Jackie is a 1998 British biographical film directed by Anand Tucker, starring Emily Watson and Rachel Griffiths as the British classical musician sisters Jacqueline du Pré (cello) and Hilary du Pré (flute). The film covers Jacqueline's meteoric rise to fame, her alleged affair with Hilary's husband Christopher Finzi, and her struggle with multiple sclerosis starting in her late 20s ultimately leading to her death at the age of 42.

In 1960s London, sisters Hilary and Jacqueline "Jackie" du Pré both pursue musical professions after being instructed throughout their childhoods in music by their mother; the flute for Hilary, and the cello for Jackie. Though Jackie rebelled against practising as a child, she became a virtuoso in early adulthood, quickly rising to international prominence.