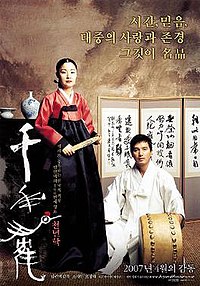 Beyond the Years is a 2007 South Korean drama film. Celebrating director Im Kwon-taek's 100th film, it is based on the short fiction "The Wanderer of Seonhak-dong" by Lee Cheong-jun, and was presented at the 2007 Toronto International Film Festival. Despite being an informal sequel to Im's phenomenally successful Sopyonje (1993), Beyond the Years was not popular with Korean audiences.