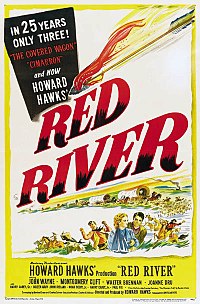 Red River is an American Western film shot in 1946 but released in 1948, directed and produced by Howard Hawks and starring John Wayne and Montgomery Clift, giving a fictional account of the first cattle drive from Texas to Kansas along the Chisholm Trail. The dramatic tension stems from a growing feud over the management of the drive, between the Texas rancher who initiated it (Wayne) and his adopted adult son (Clift).

Thomas Dunson (John Wayne) wants to start a cattle ranch in Texas. Shortly after he begins his journey to Texas with his trail hand Nadine Groot (Walter Brennan), Dunson learns that his love interest Fen (Coleen Gray), whom he had told to stay behind with the California-bound wagon train with the understanding that he would send for her later, was killed in an Indian attack.