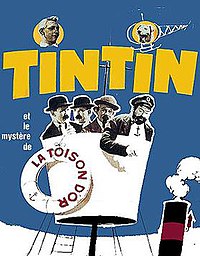 Tintin and the Golden Fleece 1961

Tintin and the Golden Fleece (in the original French, Tintin et le mystère de la toison d'or, meaning Tintin and the Mystery of the Golden Fleece) is a film first released in France on 6 December 1961. Featuring characters from The Adventures of Tintin comic book series written and drawn by the Belgian writer-artist Hergé, it was a live-action film with actors made-up to look like the characters and featured an original storyline not based on any of the books.

Captain Haddock (Georges Wilson) learns that an old shipmate, Paparanic, has died and left him a ship, the Golden Fleece. Tintin (Jean-Pierre Talbot), Snowy and the Captain travel to Istanbul only to find it's an old cargo ship in a dilapidated state. On board, they meet the ship's cook Clodion and Paparanic's pet parrot Romulus. A businessman named Anton Karabine (Demetrios Myrat) arrives and claiming to be an old friend of Paparanic, offers to buy the boat for "sentimental" reasons, but the huge amounts that he offers makes Tintin suspicious and on his advice Haddock to take time to think it over.